Deli Cole Slaw for a Crowd 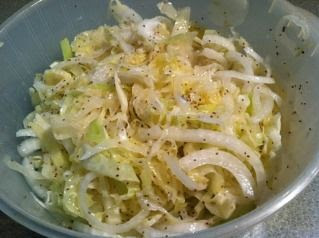 I always get asked for this recipe when bringing it to a potluck or picnic. It has a sweet and sour taste and looks so fancy.

In a large bowl, alternate layers of thinly shredded cabbage with thinly sliced onions.  Pour 1 cup of sugar over mixture and set aside.  Make a heated sauce by mixing and bringing vinegar, oil, salt, mustard, and celery seed to a boil.  Pour over cabbage and onion mixture and let stand covered at room temperature for 4 to 6 hours.  Mix well before serving.

Note: A German family recipe since the 1950s.  We called it “Tootie’s Cole Slaw.”

Makes about a gallon: enough to serve 1/3 to 1/2  cup servings. Should serve about 35 to 45 people.  Recipe can be halved or doubled depending on number to be served. Keeps well in the refrigerator for weeks. Good for dieting, especially, if using Splenda.

Pin It
Posted by Gail Snyder

Some of My Food Photos

Good Deal Meals is also on Facebook "Like" me" on Facebook, and comment or ask questions.
My recipes have been featured at 12-Tomatoes.com, RecipeLion.com's free e-mail newsletter, Helen's Cooking.com, MeetPenny.com, La Cocina de Leslie.com, The Country Cook.com, 4 Little Fergusons.com, Flour Me With Love.com
Your comments and feedback are welcomed.
Wishing You Good Eating and Good Health!
– Gail

Archive of My Favorite Recipes